In the Victorian period, the theory of 'separate spheres' for men and women developed. The man's sphere was the world outside the home, where he was to go and earn a living to keep his family. The woman's sphere was the domestic. She was to be the 'Angel in the House', managing the household and providing the moral influence for the family. 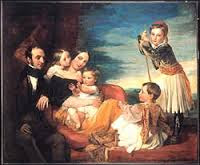 In practice, this applied only to women who could afford not to work, and not all of those. Many well to do women were engaged outside the home in what would today be called social work or voluntary work, relating to health, sanitation, education and many other aspects of life.

For women who worked, the home was also considered to be their proper sphere; domestic service was the most highly approved of occupation for women who needed to earn money. It was also the area in which most women were employed.

Many women worked as teachers and governesses.  There were large numbers of dressmakers, seamstresses and needlewomen.

Records such as the census returns, however, show individual women employed in a wide range of occupations. Large numbers of girls and women were employed in the textile industries of Lancashire and Yorkshire. The 1851 census records cotton reefers, cotton knitters, cotton spinners and power loom weavers.

There were still remnants of older industries. Mary Murray and Charlotte Atkinson were handloom weavers in Cumberland.

The straw plait industry employed many women and girls in Bedfordshire and Buckinghamshire. Susan Bunker, aged 66, was a straw plaiter. Kate Hill, aged eighteen, was a straw bonnet sewer. In another regional industry, Elizabeth Pope, aged fifteen, was an apprentice painter of earthenware in Staffordshire. Jane Baddley, 71, was a 'potter paintress'.

Women were not permitted to work underground in the mining industry, but they worked on the surface. Ann Donald, 78, was a copper miner and Mary Wearn, sixteen, a miner girl, both in Cornwall. Jane Wotton, 82, was a coal miner in Staffordshire.

There were women farmers, with land varying from fewer than ten acres to over a hundred, employing men and boys. Women were also agricultural workers labouring in the fields.

Susan Dorrington, 29, was a theatrical performer in Warwickshire. Mary Hutton, 25, was a student at the Birmingham School of Design. Susan Harley, 37, was a bookseller's assistant in Warwickshire. 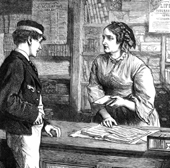 Women were hawkers, pawnbrokers, 'dealers in small wares'. Elizabeth Fenwick, 21, ran a stall in a bazaar in London.

Perhaps the most unusual of all was Jane Gardner, aged 78, of London. Born in Carolina in 1773, she gave her occupation as 'American Loyalist'. She herself was only a small child at the time of the American Revolution; one can only imagine what the circumstances of her upbringing were, for her still to be unreconciled to it in her old age.

Historians have, to some extent, to look at the bigger picture, to deal with statistics and percentages. Novelists can, and should, remember that behind every statistic is a person with a rich and unique history. It should be possible to tell a story about any one of the women mentioned here, or about any of the millions of other women whose names are recorded in censuses, parish records and trade directories.


Posted by Victoria Prescott at 22:53 No comments:

This is an eminently unliterary age, incapable of thought, and therefore seeking to be amused. Whereas the the writing of books was once a painful act, it has of late become a trick very easy of accomplishment, requiring no regard for probability, and little thought, so long as it is packed sufficiently full of impossible incidents through which a ridiculous heroine and a more absurd hero duly sigh their appointed way to the last chapter.

Whereas books were once a power, they are, of late, degenerated into things of amusement with which to kill an idle hour and be promptly forgotten.... Who troubles their head over Homer or Virgil these days - who cares to open Steele's 'Tatler' or Addison's 'Spectator', while there is the latest novel to be had, or 'Bell's Life' to be found on any coffee-house table?

Few writers in any age would be likely to agree that the writing of books has 'become a trick very easy of accomplishment.' Critics in any age however are likely to compare their literature unfavourably with that of the past.  The lines above were spoken by the hero of The Broad Highway, by Jeffery Farnol, published in 1910, and set in the Regency period.

Jeffery Farnol was a prolific writer of romantic and swashbuckling historical fiction. His titles include My Lady Caprice, Black Bartlemy's Treasure, Adam Penfeather, Buccaneer, and The Geste of Duke Jocelyn. He, or his publishers, described his works as 'a romance of the Regency', 'a stirring pirate story', 'a mystery story of merry England'.

Farnol was a bestseller in his day, but one could ask 'who troubles their head over Jeffery Farnol these days'? I remember shelves of his books in my local library in the 1960s and 1970s, but his popularity was already declining in his lifetime. At his death in 1952, his obituarist in the Times wrote:

For the moment the taste for the romance flamboyant seems to have been superseded - and not necessarily by a taste for anything better.  Even those who sniff patronizingly at his novels admit that he achieved something more than the costume and prose style of Wardour Street. Whatever else his books lack... they flow with untroubled zest and assurance.

Farnol's flowery prose style, the relatively slow pace of some of his work, his romanticised view of English rural life in the past, would be assumed not to appeal to modern readers, who are supposed to have shorter attention spans and to require more realism in their fiction (although there is nothing wrong with a little romanticism, and fiction need not always be realistic).

Farnol has a niche following today, but as a bestseller he is largely forgotten. Which of today's prolific and successful writers of historical fiction will be remembered? Will people still be reading Bernard Cornwell or Philippa Gregory in fifty or a hundred years' time? Or will they come to be regarded as out of date as readers move on to the next fashion in historical fiction?

Posted by Victoria Prescott at 22:05 2 comments:

The time comes when writer stops thinking that he or she will never manage to sort out the mess that is the first draft of the current work in progress, and begins to see a point in time, in the not too distant future, when it will be finished.

It's an exciting time, because one can look forward to having a new book published, and to starting another one.

The only difficulty is deciding what to write. One of the advantages of being self-published is that one can choose for oneself, without having to worry about whether a particular genre or subject is currently considered marketable.

On the other hand, it can be a disadvantage, because one has to decide for oneself, without the benefit of discussion with an agent or editor who knows about trends in book buying, and about what else is due to be published in the next year or so.

A self-published writer cannot - or should not - wait to see how the current work in progress will sell before deciding what to write next; in digital self publishing, the emphasis should be on getting the next book out as quickly as is consistent with quality, so that readers don't forget one's name.

So, should I write another book about this set of characters, or that set of characters? What about another standalone, similar to the already published one that's been doing quite well? Or that new genre and pen-name I've been thinking about?

Or I could start work on one of my shiny new ideas.

Of course, there is always a shiny new idea to distract the writer away from the work in progress. I have a lot of respect for writers such as Dorothy Dunnett and J. K. Rowling, who conceived multi-volume sagas with ongoing storylines and saw them through to the end - in J. K. Rowling's case, while also dealing with the demands of a new marriage and new babies, overseeing the production of the films, and worldwide fame.

Realistically, I know that the shiny new ideas (currently three of them) need a lot of thought and planning before I can begin writing. While I know the characters and settings, I have no idea of plots!

Of course, if one listened to the doom-mongers who claim that the e-book boom is over, and the Kindle is dead, one wouldn't bother to write anything at all. But the ideas would still be there, so why not write them down and put them out there?

Posted by Victoria Prescott at 17:58 No comments: